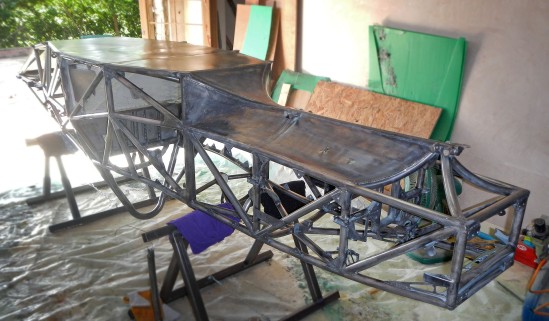 In my continuing effort to get everything welded onto the frame so can paint it, it’s time to build the floor pan. SCCA rules allow the floor pan to be a stressed skin, so this one fully welded around outside and to all crossmembers. To anyone who wants to learn to weld better, I recommend welding a floorpan. That’s a lot of welding. None of these pieces were laser cut– templates were made in plastic sheeting, transferred to sheet steel, and cut out with an angle grinder. Wear hearing protection. And eye protection. And lung protection. And heavy gloves up to your elbow. Angle grinders can mess you up.

The floor pan around  front keel is of special interest. Some parts have a single curve which is easily fabricated, but two of the pieces have a compound curve which can’t just be bent. They have to be pounded into submission to make them fit. As this is my first attempt  at metal shaping, I started out tentatively. After a lot of pounding I was getting nowhere and got angry. It turns out this is what you need to do. Pound the crap out of it, then fix the area around the big dent you just made, and eventually it takes shape. An English wheel would have been useful, but building or buying one is a big project.

There are two layers of steel under the fuel tank and the driver’s butt, one under the legs. Should be stiff, strong, and safe. And now, on to the photographs. I suffered through this. Now it’s your turn:

Priming the bottom of the fuel tank

To get optimal suspension geometry and aerodynamics I’ve designed the car with a front keel under a raised nose. This gives the longest possible lower front A-arms, minimizing the angle changes of the front suspension as it goes through bump and jounce motions. The raised nose clear airflow around the front wing. My computational fluid dynamics (CFD) studies show airflow around the front wing is extremely important as the wing operates in ground effect and generates downforce all out of proportion to its size. I spent a considerable amount of time trying to increase the downforce generated by the underbody and rear wing to match that of the front wing, even though those elements are far larger.

The front keel will use a stressed skin of aluminum formed to shape and riveted to tabs welded onto the frame tubes. This is the highest-stress area of the entire chassis, as under braking something like 2800 pounds of force will be transmitted through these members. You can visualize the car supported vertically on the front keel, with two more cars stacked on top of it, so this needs to be really strong. 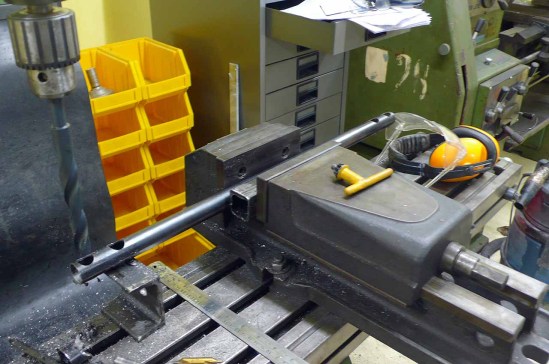 Front keel tube is drilled on the milling machine for front lower A-arm attachment points. This will give perfect mounting locations. 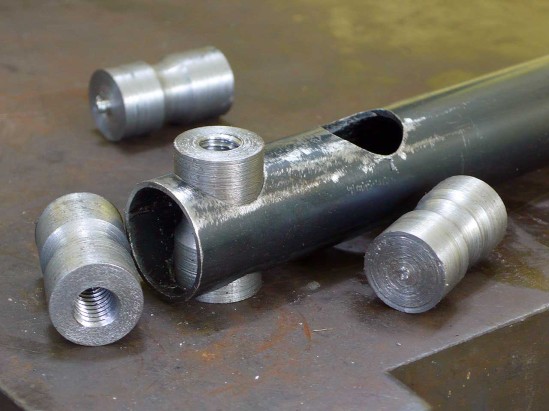 Lower front A-arm attachment points were cut and drilled on the lathe, then tapped. 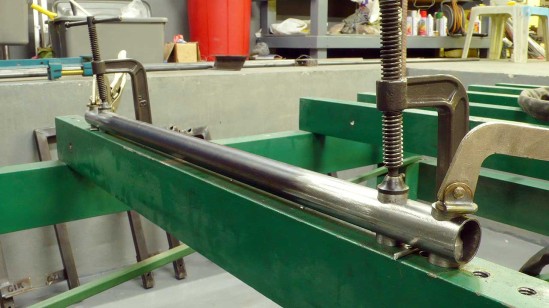 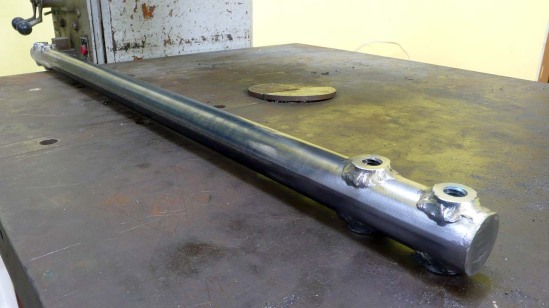 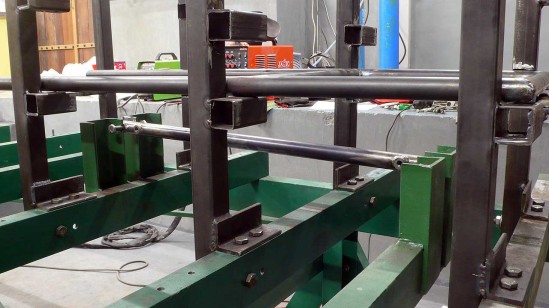 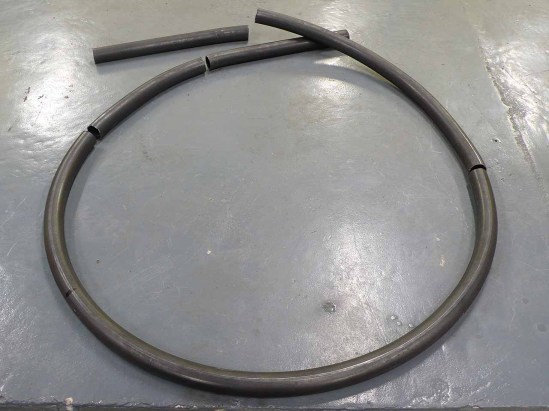 The 3-roller tube bender generates about 65 cm of scrap at each end on small-radius bends before it starts generating the correct constant -radius bend.

First front keel down-tube in place. The surface of the keel will be concave to let air flow better across the upper surface of the front wing, necessitating curved tubes to hold the keel. 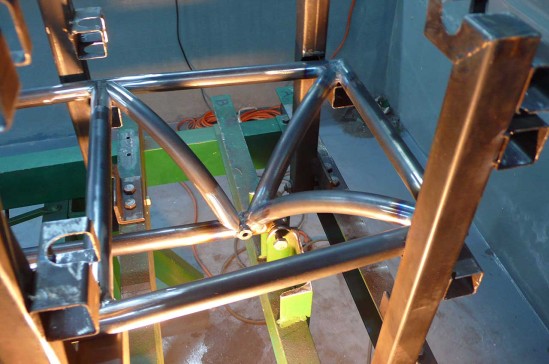 More front keel down-tubes. The two rear tubes are a recent addition to the design as this area needs to be phenomenally strong and the tubes weigh almost nothing. 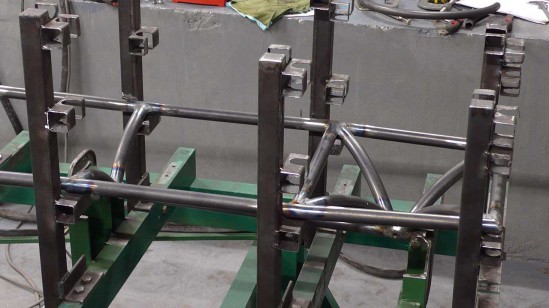 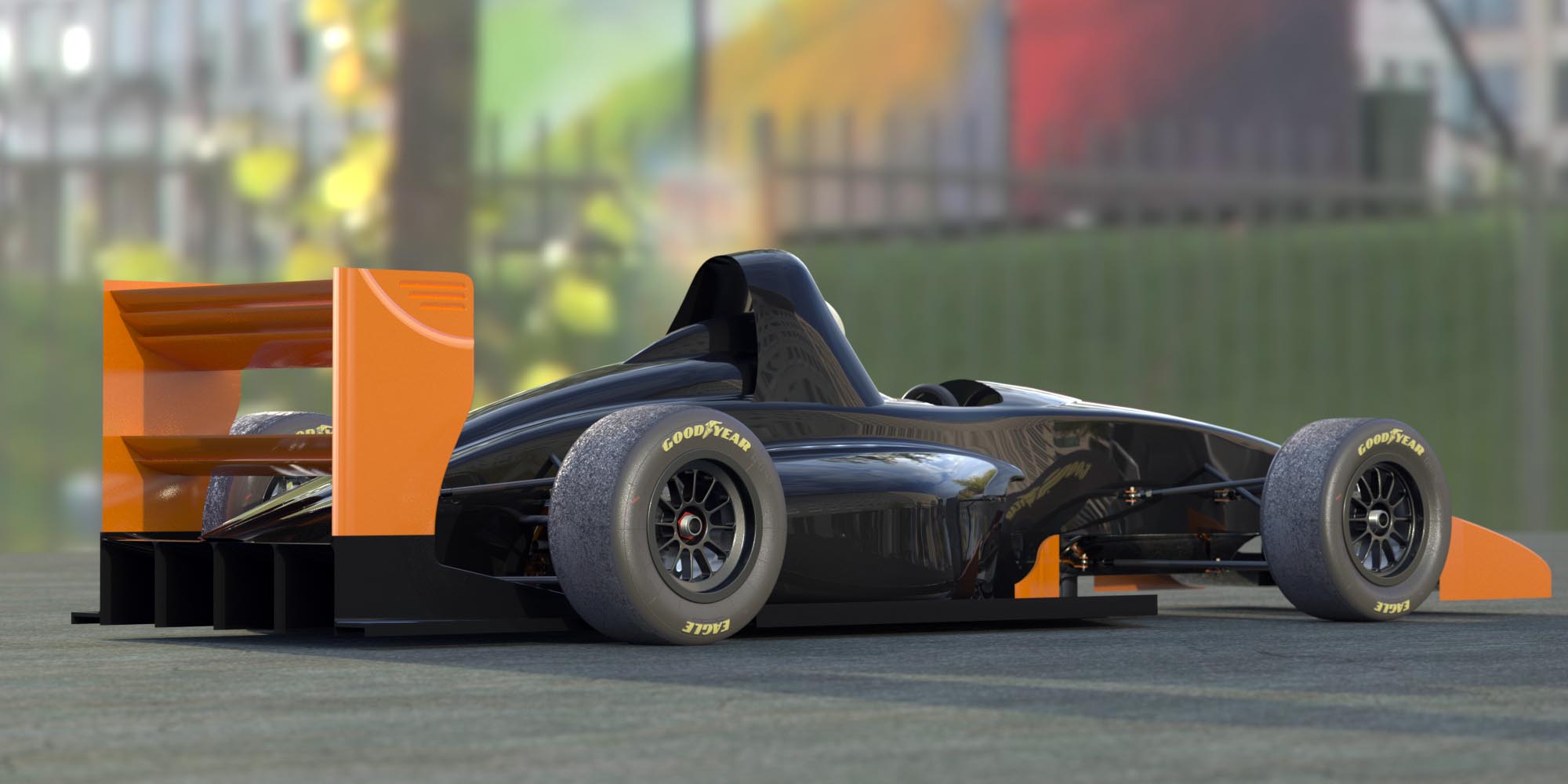